It used to be said that whenever the US dollar sneezed, the South African rand caught a cold. That still holds true to a certain degree. But now, with the rand becoming a proxy for emerging market currencies in general, it’s equally the case that when developing economies sneeze, the rand ends up with the cold.

At the moment it’s one of those colds you can’t get rid of. Rand volatility has become the norm, driven by emerging market issues such as President Trump’s ongoing trade wars with the likes of China and Mexico, Turkey’s economic woes which will likely be exacerbated by its current military adventures in Syria, Argentina’s debt crisis, and political uncertainty in Russia, which may destabilise the rouble.

How has the rand become a proxy for emerging market currencies around the world? Largely because of the rand’s liquidity and South Africa’s very strong and sophisticated financial system that is regarded as being on par with the highest in first-world standards. Among other things, the country’s banks are well respected and foreigners can easily invest into the economy and repatriate their capital.

The rand is one of the top traded (and easiest to trade) emerging market currencies in the world, explained SA-based Prudential Investment Managers in an article published on its website. “Consequently, traders often use the rand as a proxy for all emerging markets. So negative news, or even simply fickle sentiment, surrounding any emerging market can potentially have a significant and rapid impact on [the rand].” 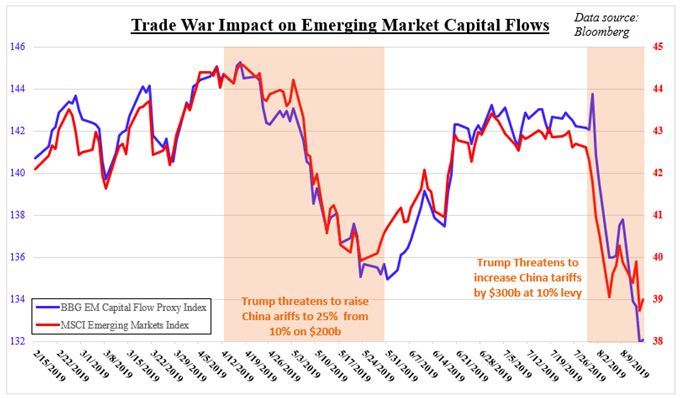 The extent to which this ‘proxy effect’ is being felt was sketched by Francois Groepe, a Deputy Governor at the South African Reserve Bank, in a November 2018 presentation. He said the rand was, at the time, the 16th most-heavily traded currency globally, while the economy ranked at around 32nd or 33rd in the world. “There is little doubt that the rand is a proxy because why would you have such a difference in the turnover of the currency relative to the size of the economy?” he said. “Often the currency moves in tandem with what’s happening to other emerging markets.”

Thus it has become an important barometer of general global sentiment towards emerging markets – both positive and negative.

Prudential notes in its article: “As international investors are always on the lookout for market signals that may suggest an increase in the risk profile of a country or better relative returns elsewhere, investor sentiment towards emerging markets like South Africa is generally very fickle. Some of the traditional vulnerabilities associated with emerging markets include political instability, policy uncertainty, high government debt levels and large current account deficits.”

This changeable sentiment is sometimes referred to as the contagion effect. When one emerging market economy goes awry for some reason, investors sell their holdings in that country and then often choose to sell associated investments in other emerging markets as well, based simply on emotion that has no basis in logic or on-the-ground reality.

Analysts point out, though, that the rand’s volatility does not entirely result from being an emerging market proxy. In some instances investors still erroneously see South Africa as a ‘commodity economy’, which brings its own vagaries in terms of market ebbs and flows.

The volatile rand also reflects the South African economy’s poor performance resulting from slow growth, high unemployment, political uncertainty, electricity supply problems and low levels of business confidence. In the fourth quarter of this year it may also be hit by the global uncertainty caused by the arrival of the UK’s Brexit deadline, a possible Moody’s downgrade and Mr Trump’s unpredictable trade war machinations.

“We continue to believe that the rand will remain volatile, and have revised down the expected case forecast for a somewhat more depreciated level as global trade tensions have worsened and show little chance of resolving in the near term,” said Investec Bank’s Chief Economist, Annabel Bishop, in a note issued in late August.

Nick Kunze, Portfolio Manager for Sanlam Private Wealth, agreed in an interview published by Business Day on 27 August. He noted: “If the news flow continues like we’ve seen recently and the markets get nervous, and this is coupled with a slowdown in economic growth, then emerging-market currencies will suffer, foreign money will flow out of the country and we could see the rand weaken more … risks are definitely going to escalate in the remainder of the year. As long as these risks continue, the rand and other emerging-market currencies are going to be on the back foot.”

But a few weeks in economics – as in politics – can be a long time. In a mid-October article written for Independent Online, the Chief Economist for Pretoria-based Rebalance Fund Managers, Chris Harmse, reported that the South African business confidence index in September had improved versus the August figure and “gave some impetus towards an improvement in the economic climate”. On the global front, he observed that there was optimism the trade war between the US and China could be nearing an end.

So, does the rand still have a severe cold, or merely a few emerging market sniffles that won’t go away? We’d say it’s a little too soon to throw away the rand’s cold and flu tablets just yet…